My first project this week was to get correct data from an HLLD solver. After extracting the HLLD solver from Athena last week I ran some shock tubes using Athena++, plotted the results to find the locations of the waves, then extractracted the states on each side of each wave. After that I plugged those states into the HLLD solver to get known correct fluxes. In addition to the cross-wave states I only created some tests with special cases, negative density, all zeros, degenerate state, etc.

Writing dozens of tests for the HLLD solver would have required duplicating a ton of code. To deal with this I wrote a test fixture that handles most of the actual running and testing so that the user just has to provide the states, adiabatic index, etc. I tested it by implementing it the HLLC solver and made a PR with the new changes. While working on this I also implemented a processor agnostic function for computing the MHD energy in a cell so I’ll need to write some tests for that too. I found that Athena does something so that their adiabatic index variable, Gamma, appears to actually be \( \gamma - 1 \) but I haven’t verified that. I will look into that more next week and get it ironed out; I’ll probably have to rerun the flux calculations to get new fiducial fluxes. 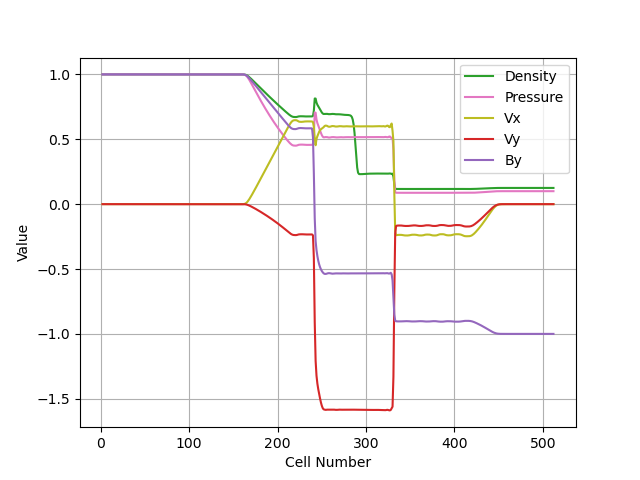 HLLD Prep I found the issue with \( \gamma \) from last week. It turns out I had made a mistake when extracting Athena’s HLLD solver and had turned their \( \gamma - 1 \) variable into just \( \ga...

HLLD Implementation After finishign the HLLD solver through the L/R states last week I spent this week implementing the star and double star states. I used a similar pattern to the L/R states. Thi...

HLLD Debugging This week I was mostly working on debugging the HLLD solver I wrote for Cholla. I found a handful of bugs in the \( L/R \) and \( L^* / R^* \) states and both of those states appear...